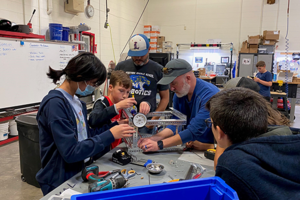 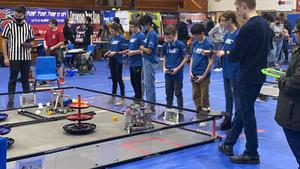 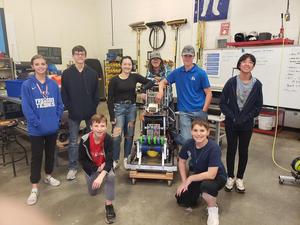 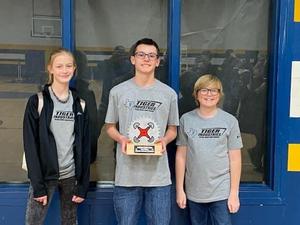 During the month of February, designated as Career and Technical Education (CTE) Month, Frenship ISD is excited to recognize the highly successful CTE program that is shaping Frenship students’ futures. This week we would like to feature Frenship Robotics and Engineering - a program that spans from the elementary level to high school.
GEAR (Get Excited About Robotics)
GEAR is a program that Frenship elementary and middle school campuses participate and compete in. Students and advisors prepare for GEAR Robotics events by building robots with the LEGO Mindstorms program and the EV3 robots.
Teams of 3 build and program smaller LEGO robots to go through a playing field to deliver or move items to certain locations. GEAR uses a 2 minute time limit for the competing robots to run through the course and score points for their team. GEAR robots are designed so they function solely on programming done to the robots before the meet.
Frenship hosted the GEAR kickoff event last weekend to get students and sponsors ready for their competition season this spring.
Frenship Director of Entrepreneurship & Innovation Keith Patrick explained that GEAR is funded and organized by Texas Tech University.
"GEAR is funded through grants to the Edward E. Whitacre Jr. College of Engineering at Texas Tech," Patrick said. "They staff the program, students help organize and man the events, they distribute the game pieces and game mats. It is really advantageous to the school district because we don't have to pay to provide the supplies."
Patrick said GEAR is an after-school program that is available for students in third through fifth grades and all grades at the middle school level.
"They have a trial run competition at the Ninth Grade Center in March and a game day in April." Patrick said. "The trial run is just like a competition but the scores don't count. We will have schools travel in from around the area, Dimmitt, Seminole, and several others."
Patrick said the competitions take place at Frenship, around Lubbock, Midland-Odessa, and in Amarillo.
"A conglomeration of top teams from all of those competitions will go to a finals competition at Texas Tech in late April or early May," Patrick said.
Patrick explained that the Frenship High School Robotics and Engineering students and teachers are always willing to help mentor the elementary and middle school students and advisors.
"We have our high school robotics kids and teachers mentor our GEAR students," Patrick said. "These GEAR advisors and teachers are not experts and they learn a lot as they go. "It really comes down to letting our kids problem-solve, work as a team, so it's just a lot of really neat benefits to the kids."
Air Battles
Air Battles is a drone flying competition and was introduced to Frenship students this year. In Air Battles, the teams fly a drone through a series of obstacles on a playing field. Programmers also program for the drones to fly on their own in the competition.
Last weekend, teams from around the South Plains joined Frenship Air Battles teams at Frenship High School for a competition hosted by the FHS Iron Tigers, Frenship High School's competitive robotics team.
"Our Frenship High School Robotics team planned the competition, mentored the teams, executed the whole thing," Patrick said. "They were in the P.E. gym at Frenship High School and their drones flew through an obstacle course. Several teams from around the area competed."
Air Battles is also funded through Texas Tech from an endowment from the College of Engineering. They compete one time each school year.
FTC (First Tech Challenge)
FTC  is a competition series of events for middle school and high school students, however at Frenship is is exclusively for middle school competitors.
Heritage Middle School Robotics Advisor Kim Thomson said there are four meets throughout the fall and winter months where winners advance to the next stage of competition.
"Each team creates and builds their own robot that has to meet specific design criteria and programming," Thomson said. "The competition consists of a two and a half minute match in which each team is partnered with an alliance and competes through a series of obstacles to deliver items to certain areas of the playing field for points."
Thomson explained that at each meet, teams compete for a total of five matches and points are accumulated and combined together over the first three meets.
"So far this year, the teams have competed at meets at Denver City, Lubbock Cooper Middle School and Knox City," Thomson said. "The league championship meet is scheduled for this Saturday at Lubbock High School."
Thomson said Frenship Robotics is a great program for students of all ages.
"Students take away a sense of pride and accomplishment with their robots," Thomson said. "Programming skills and teamwork skills improve as well as an opportunity for competition. A lot of skills in robotics are learned through trial and error and tenacity, and I am amazed at our students and their dedication to improve week to week. I love that what the kids start in middle school will carry up with them when they join the high school engineering program!"
Print